My grandpa used to say that cheaters are just lazy cowards.

They’re terrified of losing, but they’re too darn lazy to do the hard work to win a fair fight.

For years, Texas Republicans have been making it harder for voters to cast a ballot. By design, these voter suppression tactics hit hardest the most Democratic-leaning populations: people of color, the disabled, young people, working families.

Rather than working to win their votes, Texas Republicans just make it harder for them to cast their vote.

You could even say the Texas GOP has decades of expertise on making voting hard. Even before SB1, Texas was ranked the most difficult state for voting. https://newsroom.niu.edu/how-hard-is-it-to-vote-in-your-state/

Then along came SB1, which was so aggressive and made the absentee ballot request system so confusing that nearly 50% of the voters who requested ballots were denied!

It begs the question: after all these years suppressing votes, why would the Texas GOP get so much more extreme now? What has changed to make them design legislation that’s so outrageous?

And, similarly, why isn’t every Republican state as focused on voter suppression tactics? Why is Texas such an outlier?

The answer is pretty simple, and we’ve got the data to prove it:

The most extreme voter suppression efforts are adopted in red states that are trending purple. And the more purple they lean, the more aggressive those efforts become.

So, in a strange way, Texas Republicans are showing their hand. We can tell just how concerned they are that Texas is trending purple by how aggressive they’ve gotten with voter suppression efforts.

But, as my grandpa would say, Texas Republicans are lazy cowards. They’re scared of losing and know they’d lose a fair fight.

So rather than working harder and earning votes, they’ll stack the deck in their favor with extreme gerrymanders and targeted voter suppression. But the opportunity to gerrymander comes around a few times a decade.

The opportunity to suppress votes comes around … whenever they want it to.

Listen, if voter suppression is part of their strategy…

Voter protection has to be part of ours.

That’s why it’s up to all of us to make sure we fight for every vote and every voter in every district in every election.

Republican efforts at voter suppression don’t have an off-season, and neither do we. Our voter protection projects operate 24-7-365, making sure we build on each and every cycle. We leave no voter behind.

But protecting voters across Texas is a group effort. And that’s why we’re so proud to have you on our team. And as Texas trends further and further to the left, we expect Texas Republicans to get more, not less, aggressive.

Because of people like you, we’ll be ready … for whatever those lazy cowards throw at us.

We are thrilled to have Luke Warford and David Pepper join us to launch Blue Texas: a completely revolutionary community that’s going to boost voter protection and Democratic nominees for Texas state legislature.

Can you join us?

Register here, or using the button below:

Register for our Blue Texas call with Luke Warford and David Pepper!
Next → 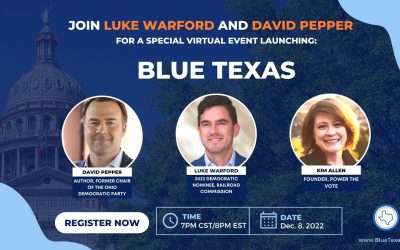 Our friend Luke Warford ran for Texas Railroad Commission on a promise to Unf*ck the Grid. He's going to be joining us on Thursday to talk about how we Unf*ck Texas. We are thrilled to him and David Pepper, author of Laboratories of Autocracy and legendary...